Items from my etsy store were featured in three treasuries today so I thought I might put them on here:

Many thanks for the ADD...check them out tons of great stuff!

I hope to get the majority of my presents this year for my friends and family from ETSY.  There are so many wonderfully talented artists there and so many unique gift ideas!

I wonder how many people still have all their shopping left to do...or is it all finished?

On a side note....I vowed to myself that I would take off a week after the marathon and that week comes to an end today.  I think I have gained like 5 lbs this week and I have really enjoyed the time off, but I am excited to get back to exercising.

I'm not going on any plan but...should I?
Posted by Serendipity Paper Crafting at 5:48 PM No comments:

Crafting for the Holidays 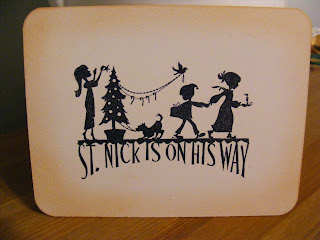 I really have things backwards...on the most beautiful day we have seen in many a November I am thinking SNOW, WINTER, CHRISTMAS.
I have so many ideas for my etsy store...almost too many to start and finish any one thing.
I am considering sending these old fashioned postcards as our Christmas cards.  My plan was to hand write a message from "Santa" on the back.  Since we have to include the obligatory kid/family picture I am going to put them into envelopes. 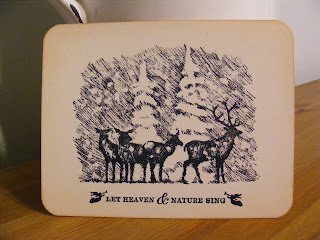 Another version!  I love Christmas!
Tomorrow I aim to start my decorating and this year I am going to engage the kids in helping to find hand made ways we can decorate.
Posted by Serendipity Paper Crafting at 6:35 PM No comments:

So many things I have wanted to blog but then I kept forgetting and remembering a day later and then another day later...etc etc...
RAN MY FIRST MARATHON!!! Official time 4:24:53.


I had been worrying over that race for so long and now its over...its very odd.
Here I am at Mile 23....cannot believe how relaxed I look.  And I took Janae's advise (aka thehungryrunnergirl ) and put my name on my shirt!  It was awesome to hear people shouting encouragement directly to me! 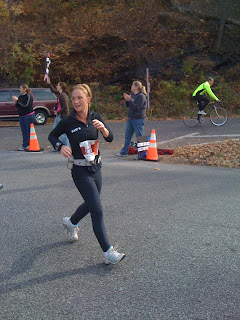 Finished and posing with my super fast Friend.  She so patiently waited for me to finish...some 57 minutes after she did!!! 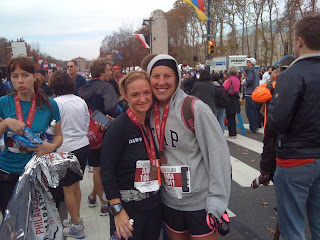 Over the next few days I hope to put to paper some of things on my mind regarding the Philadelphia Marathon.  But I guess the first thing I wanted to put out there is that I would never have thought myself to be  marathon runner.  One would not look at me and think marathon runner.  I'm 5 feet 2, boobs that don't seem to know they are fat cells mostly...I think they get bigger the more I run, and I am always fighting off some injury (which may just be typical?).
To begin, I believe anyone who wants to put in the time to train can run a marathon.  The hardest part of the marathon is the mind telling you that a marathon is a near impossible distance for you.... oh and the training.
Here is what worked for me... I begin my "racing" in April.  I sign up for all my races way ahead of time.  It helps me to be accountable to the distance.  I don't typically like to waste my money on races I don't plan to do and so if I know they are looming, I know that I MUST get in those training runs and gym sessions in. I start out with several 5k's for charities that I support and then proceed to lengthen the races as the season continues. I run them with friends and family and they boost my running confidence and give me the opportunity to experience finishing a fast race in a relatively pain-free way! My final race this year I planned as the Philadelphia Marathon on Nov. 20, 2011. I do plan to keep up my fitness with a half every month until April this year, but it's not something I have done previously.  The runs do get expensive if you wait so signing up early not only keeps you accountable but saves you money!  Then you can get the finisher shirt at the end...guilt free!
I was really expecting the marathon to be awful.  I told my husband "one and done!" But to my surprise it was amazing and so much fun. I will definitely be doing another!
The next marathon I do I'd like to be a location I haven't been before...TBC...
I plan to do a small blog about the hotel as that was something I would do differently but that also is to be continued...
We arrived early in Philadelphia to get to the convention pick up our bibs and check out all the "cool" swag. I guess because it was the second day they were low on inventory...what they had wasn't so great and not many sizes styles left of the official merchandise.  Around 2pm we headed over to the Reading Terminal Market and my friend and I split a turkey spinach wrap with no mayo!!!  It was the perfect amount as we had a reservation to Ralph's Restaurant at 4:30.  The early reservation was necessary as we did not want to fill up too late or get to bed too late...I was shooting for 9pm.  I ate whole wheat penne with marinara and meatballs (probably about half of it), split a Caesar salad with my hubbie (not mayo based) and lots of water.  I didn't want to overeat.  And let me tell you...I have never been to Ralph's and not ordered Fettuccine and Alfredo Sauce...wow was that a challenge!!! They make the most fabulous Fettuccine Alfredo...I'll be back!!!  Picked up a bagel and banana on the way back to the hotel for the morning... With a 7am start time there was no time to eat before unless I did it at 5am.  When we got back to hotel the men planned their course and we talked about ours.  We parted ways around 7pm and I proceeded to do X-Stretch...P90 dvd.  I have found that the 45 min stretch is perfect the night before a run! In bed by 9pm with clothing all layed out and bag packed!
I'd love to hear what pre-race rituals other have?  If not I might need to follow the same blueprint every time!
When's the next race?
www.hungryrunnergirl.com
Posted by Serendipity Paper Crafting at 7:38 PM No comments:

It's an exciting week!  Got published in Taste of Home magazine and everywhere I go I keep seeing it in stores!!!   My holiday tags are on several pages in the magazine.  The editor contacted me a few months back to let me know but since I had never heard of the magazine I just assumed it was a small thing.  I figured I'd have to special order it and be like the 3rd reader :)  I think I scared a few people at the Costco when I saw the mag and got way too excited. 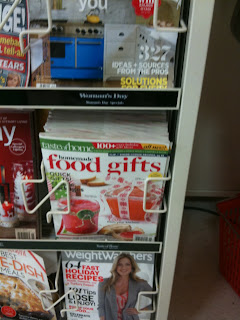 There it is enticing me at the checkout counter at Shop Rite! 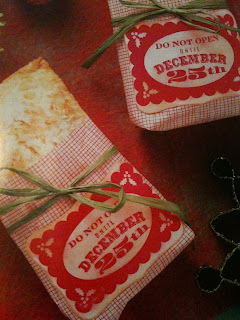 My Tags On some yummy looking bread! 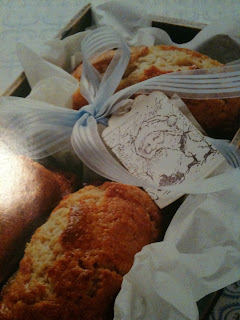 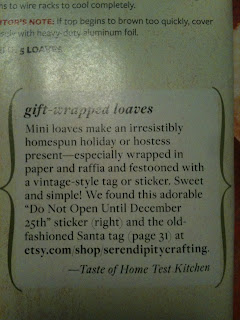 Thank you Taste of Home Magazine for the directions  to my online store!
Posted by Serendipity Paper Crafting at 6:56 PM No comments:

#9 Who's the perfect dog? Princess Daisy! 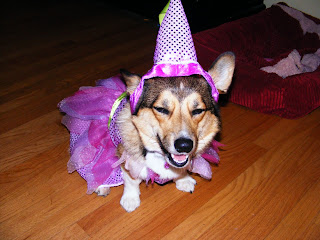 This is the perfect breed of dog for a busy family.  Pembroke Welsh Corgi
1. Easy peasy to train.
2. Loves to dress up!
3. Legs are so short she cant go upstairs or jump on furniture.
4. Smart enough to listen, not smart enough to steal your PB&J (or maybe she's just that gentle).
5. Loves to sleep, and doesn't overdo things such as walks or ball throwing.  She pretty much is happy to do anything for 30 mins.... 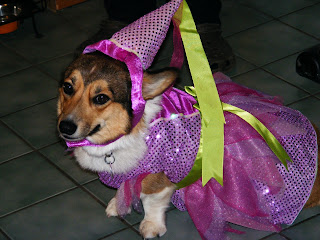 We love her!
Posted by Serendipity Paper Crafting at 6:51 PM No comments:

Daisy the Corgi Goes For a Run